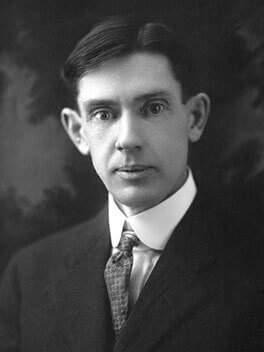 Elmer Verner McCollum (March 3, 1879 – November 15, 1967) was an American biochemist known for his work on the influence of diet on health.McCollum is also remembered for starting the first rat colony in the United States to be used for nutrition research. Time magazine called him Dr. Vitamin. His rule was, "Eat what you want after you have eaten what you should.” Living at a time when vitamins were unknown, he asked and tried to answer the questions, "How many dietary essentials are there, and what are they?" He and Marguerite Davis discovered the first vitamin, named vitamin A, in 1913. McCollum also helped to discover vitamin B and vitamin D and worked out the effect of trace elements in the diet.

His second wife, the late Ernestine Becker McCollum, RD, helped in later years to maintain the rat colony in his laboratory.

Always a nutrition visionary and advocate of dietitians, Dr. McCollum gave much of his time and energy to dietitians and dietetic students in Maryland.  After his death in 1967, the then MDA (now MAND) Foundation established the E.V. McCollum Scholarship in his honor.

The E.V. McCollum Award($1000) is awarded each year to a deserving returning graduate student.

References from Wikipedia; a special thanks to Jane Libby for contributing this background information.

2022-2023 Scholarship Update:
Due to unforeseen circumstances, the 2022-2023 scholarship applications are not yet open. We will update the website once they become available. Thank you for your patience.

MAND: May Board Meeting