November 6th has come and gone, and the election results are soon to be in the books. This campaign season was highlighted by a diverse array of individual candidates and political points of view that will soon come together in the halls of Annapolis. Looking ahead to January 2019 and the beginning of the 90 day Session of the Maryland General Assembly there are a number of new and familiar faces that will get down to the business of policy making and legislating for Maryland.

A look at the numbers

Statewide, Governor Larry Hogan and Lt. Governor Boyd Rutherford were solidly re-elected for a final 4- year term, capturing more than 56% of the vote. The Maryland State Senate, while experiencing a turnover of 36%, kept its Democrat majority holding 32 seats to 15 Republican. In the House of Delegates, there was a 30% turnover, but the House, much like the Senate, again retained its Democrat majority, picking up an additional 6 seats.

Overall, with the House and Senate combined there was a 31% turnover in the 188 seat Maryland General Assembly. There remain a couple of close races in both the Senate and the House whose results will ultimately depend on absentee and provisional ballots.

So what do the election results mean?

Your organization is well positioned to assert your influence and expertise in the ongoing changes in Maryland's healthcare delivery system. Now more than ever Maryland is focusing on connecting patients to care delivered in the community with emphasis on wellness, prevention and controlling chronic care conditions. Diet and nutrition is a core component of these public health efforts and now is the time to highlight and promote the services you provide and your fundamental importance to the success of Maryland's healthcare system.

In the first year of a 4-year term, there will be opportunities to engage and be a resource for new and returning legislators as they roll up their sleeves and tackle the issues ahead. Maryland’s unique healthcare system and agreement with CMS will continue to be a front burner issue, as will efforts to stem the opioid/substance abuse crisis. The Governor’s economic agenda including Medicaid funding, social welfare programs and K-12 education funding will be up for discussion.

How can I make an impact?

MAND's State Legislative Interactive Workshop on February 13th 2019 in Annapolis is the place to be! This has become one of the most successful and well received advocacy days in Annapolis. Legislators appreciate your time and effort to meet with them and share what it is you do and how you positively impact those you treat and work with.  Make plans to join your MAND leadership and colleagues and help make a difference! 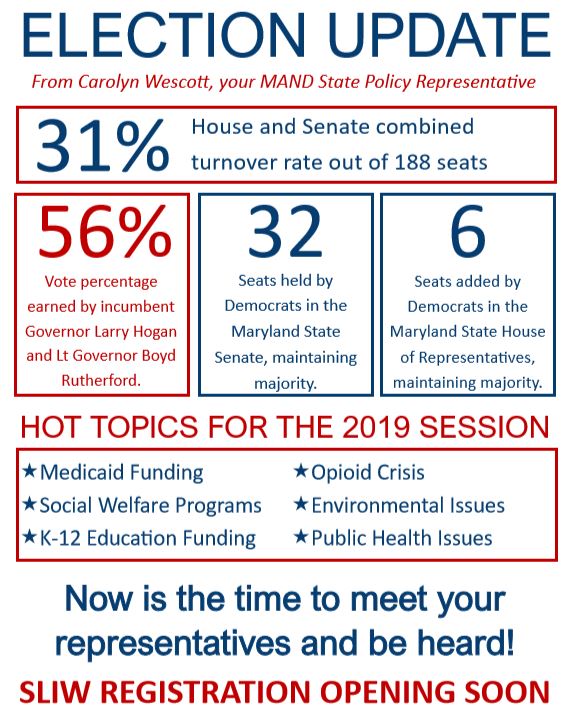 March Board of Directors Meeting